Via News of the Wierd:

Student Loans' Perfect Storm: Like clockwork, college campuses continue to be recession-free zones: Tuition rises (at public schools because governments need revenue; at private schools because it can). Job prospects without degrees are more dismal than ever. Loans are floated like cocaine in front of worried, not-fully-formed adults. Proprietary schools convince marginal students they'll be superstars. Banks rake in low-risk money. But, Newsflash: Young adults can't pay it back right now. Banks: Great! More money for us in interest! (Newsflash: Maybe they can't ever pay it back. Banks: Wait . . what?) But . . why does tuition rise so faithfully? Here's one example: The University of California Berkeley has a new "vice chancellor for equity and inclusion," base salary, $194,000 (equal to 3½ new assistant professors), with his own "chief of staff" and 16 underlings. KausFiles via Daily Caller

Incidentally, according to this graphic, that salary puts this college administrator squarely in the top 10 percent of income earners. So I think we know where those high-worth individuals are coming from now, don't we?

On a related note, I saw a potent sign today that the occupy protests are doing what they are supposed to do: focus attenation on the destruction of the middle class. While shopping at my co-op, I practically dropped my groceries at the sight of the cover of the latest Milwaukee magazine. Now my take on Milwaukee magazine's politics has been that it skews right of center - it's targetted mainly to high-income folks in the tony near suburbs and downtown condo residents, thus it always presents a rosy picture so as not to affend their readers. Like most of the local media, it steadfastly refuses to acknowledge that anyone lives in Milwaukee besides the supper-club set. So when I saw this cover, I was amazed: 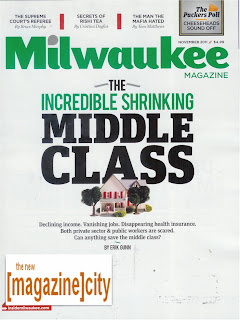 It reads: The Incredible Shrinking Middle Class: Declining Income. Vanishing Jobs. Disappearing Health Insurance. Both public and private sector workers are scared. Can anything save the middle class?

It appears we have reached a crossroads where this subject can no longer be ignored. I have never in my lifetime seen so much focus on the destruction of the middle class much less it being openly acknowledged by the media, despite the fact that the middle class has been dismantled over the course of my lifetime (I was born in '73). Maybe we are seeing a turning point?

P.S. I haven't read the article, but I doubt it seriously answers the question posed on its cover.
Posted by escapefromwisconsin at 7:26 PM