Thoughts on the Royal Wedding (really!)

Look at the photograph below. The people in the picture are generally unremarkable, and I'm sure they thought of themselves as nothing special. At this point, it was novel to even pose for a photograph. It was taken in 1911. 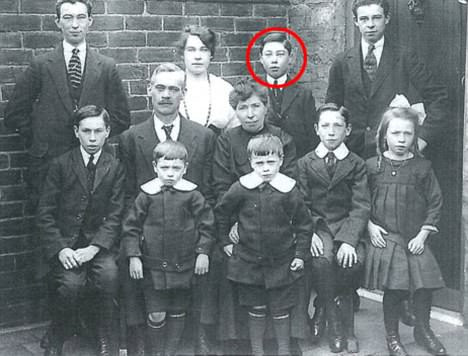 The reason it is significant is that the young boy circled in red is Thomas Harrison, the son of a lowly coal miner. In those days, coal miners were thought of as the bottom caste of British society, doing hard, gritty, dirty work for many hours a day, extracting the coal that powered the British Empire. It was tough work, and they led hard lives. Such a person was as far from the upper echelons of British society as you can imagine. Thomas did a bit better, being the first in his family to learn a trade, becoming a carpenter. According to the BBC:

He married Elizabeth Temple and, after serving in World War II, he and his wife moved from County Durham to the outskirts of London with their two daughters, Ruth and Dorothy . Virtually penniless, they lived in Southall, west London.

Who is Thomas Harrison, you may ask? He's the great-grandfather of Catherine Middleton, the Duchess of Cornwall who is married to Prince William, second in line to the British throne. Here's Kate's family tree:

What do you think he would have said if you had told the young boy in this photo that his great granddaughter would be the future Queen of England! Would he believe you? I doubt it. If you had told him as a young husband, he would have probably laughed his ass off and assumed you had way too much at the pub. In that time, in that place, it would be so far beyond the realm of possibility to be, for all intents and purposes, impossible. And yet, there it is.

In those days, not long after the Victorian Era and prior to the First World War, England was one of the most class-stratified societies on earth, as anyone familiar with the works of Charlotte Bronte or EM Forster, or avid viewers of period pieces set in nineteenth century England is no doubt familiar.

In his day, the Royals only married within the royal family. The King of England when this photo was taken was George V. George fell in love with his first cousin, Marie, who was the daughter of Czar Nicholas II's only daughter. The marriage was opposed by Marie's mother, who disliked England, and George's mother, who felt Marie was too pro-German (this was in the shadow of World War I). George ended up marrying his second cousin, May, who had previously been engaged to his older brother, Albert Victor. May's father, Prince Francis, Duke of Teck, belonged to the house of Württemberg, and her mother, Princess Mary Adelaide of Cambridge, was a male-line grand-daughter of King George III and a first cousin of Queen Victoria. When Albert died suddenly of pneumonia, George and May ended up in a relationship which eventually led to marriage. Marrying a commoner would have been unimaginable, even if the Royals ever had the occasion to meet any!

Needless to say, times have changed.

What if Thomas Harrison had thought, "I'm just the son of a lowly coal miner. I'm poor and none of my kids will ever amount to anything." How much would history be different? Certainly, the Royal Wedding we witnessed a week or so ago would never have happened. Kate Middleton would not even exist (nor would Pippa). What a tragedy that would have been!

I can recall similar things were said when Barack Obama was elected President of the United States. President Obama's great-grandfather on his father's side was a simple goat herder in Kenya. He never could have imagined his great-grandson would be the leader of the most powerful nation on earth!

History is made by individuals and the decisions they make. Sometimes we need a reminder of how much things change, even within the span of a few generations.People like me tend to try and predict where things are headed. We look at the way things are, the trends, history, and come to reasonable conclusions about what the possibilities are, and what is likely to happen. But too often we forget that history moves in often unpredictable ways. We tend to lose sight of the fact that history is comprised of actual people - individual people with their own hopes, dreams, goals and ambitions. Sometimes, impossible things do happen. We need to remember that when we feel the urge to give up hope for ourselves and our families.

It also shows the value of not discounting people who are at the bottom of society, for those people or their descendants often end up making essential contributions that would otherwise not happen. Societies with higher social mobility take better advantage of their citizenry. The higher social mobility of modern Britian has made for a much better society than the caste system that prevailed before the wars. This is particularly important to remember given the Social Darwinism that has come back into fashion in the U.S.

Thomas Harrison had no way of knowing his granddaughter would marry the heir to the English throne. Similarly, we have no way of knowing where history will take us and our children and grandchildren. That's something to contemplate. What "impossible" things are going to happen in a generation?
Posted by escapefromwisconsin at 6:13 PM