We Are All Rhesus Monkeys 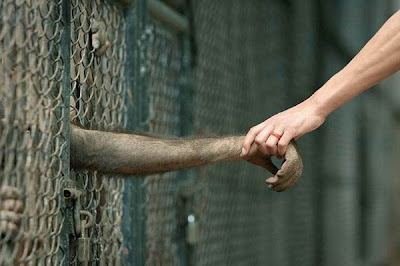 I read a heartbreaking story on ABC news about an obesity study using primates. What they do is confine these monkeys to a small area, so they are unable to play and exercise naturally. They are fed a non-nutritious diet of syrupy junk foods in order to fatten them up so they become obese, with the concomitant sickness and disease:

"We are trying to model that sedentary lifestyle," Grove said. "That sitting around all day eating tasty treats, sitting in the cubicle at work, eating those snacks all day long...they [the monkeys] will sit there and snack, just like a human will."

Kept in small cages to limit exercise, these monkeys are fattened up with high-fat, high-sugar snacks including peanut butter lard treats and a syrupy sugar drink meant to imitate a human's consumption of a can of soda a day.

"They get about 35 percent of their calories from fat," said Grove.

While most of the monkeys don't look obese to the naked eye, there is one that unmistakably does. His name is Shiva, and he weighs 45 pounds, which is more or less equivalent to a 5-foot 10-inch man who weighs 250 pounds.

Shiva's potbelly drags along the floor of his cage when he moves. Much like the other monkeys at the center, he can't seem to hide his excitement when presented with his next treat. The scientific junk food has taken a toll. Shiva is in a pre-diabetic state.

Under these conditions, the monkeys will often develop obesity-related illnesses. In fact, several of them are full-blown diabetics who depend on their daily insulin shots to survive.

Supposedly this is being done for "obesity research." The fact that these monkeys are being abused specifically to replicate the American lifestyle should give you pause to think about how "wonderful" it is to be an American these days. It's even unnecessary - we know pretty convincingly what causes obesity - it's just that the lobbyists don't want us to acknowledge it. It's more profitable to make a pill that you can sell at a high price than to, for example, ban sugar, which would make the problem vanish overnight. But I digress...

At first I felt bad and horrified what was being done to this poor, defenseless creature. Then I realized that I needed to save my pity for myself, for there is essentially no difference between Shiva, the rhesus monkey, and me, an average American. Really, I was pitying myself. Just like the monkey, I am kept immobile in a small space for a minimum of eight hours a day, confined to my tiny cubicle with minimal movement allowed. There is more than enough evidence that sitting in a chair for eight hours a day is profoundly detrimental to your health, maybe even a death sentence. I am forced to sit and stare at a screen for eight hours and manipulate symbolic objects for my "reward" - enough income on which I may procure a basic standard of living, but not enough to really get ahead, just like in a science experiment. During this time, I am under continual stress at the bottom of a hierarchy, with cortisol pumping through my veins, slowly causing my organs to decay and my blood vessels to constrict. I have only a measly two weeks a year in which I can get away from this situation, which may actually be worse. I can imagine if this poor monkey was let out into the wild to live a natural existence for a short period of time, eating natural foods, and then shut back into his confined cage that prohibits him from exercising, it would actually be more traumatic than if he had never left. Having that freedom, and then having it taken away after a only short period seems worse - like a cruel tease. That cruelty is applied to us Americans, however, who get a measly two weeks a a year to experience freedom before being chained to our desks once again.

The diet we are fed in America in essentially the same as that which is given to Shiva - highly-processed foods laden with sugar, salt and saturated fat, offered continuously. These foods are designed by corporations almost exactly as drugs - they are specifically designed to be addictive by hijacking our dopamine reward centers. Plastered on every vertical surface are constant enticements to feed this food to yourself and to your loved ones. The media is saturated twenty-four seven with advertisements for chips, cookies, snacks, fast food, and soft drinks. You can not order a meal in a fast food outlet without being given salt-laden potatoes fried in vegetable oil and corn-syrup infused water. These sugar-laden empty calories are heavily subsidized and vastly cheaper than " natural" foods. Supermarkets are even specifically designed to get us to purchase junk food - its is placed at our fingertips when we walk in the store, cheap and accessible, with the healthy foods as far as possible from the entry. Now, obviously, we are not literally being force-fed like poor Shiva. It is not so much being forced as being enticed - all of our cravings are being manipulated at all times by our environment as surely as in any scientific experiment. I question how different this actually is. After all, the monkey too is given this food and eats it freely. Of course, with massive acts of willpower, laser-like focus, and enough money, you can find alternatives. But, let's face it, most people are not going to do that. In some cases, the so-called "food deserts," even this isn't even an option. Our choices are just as restricted as the monkey in the cage. After all, how can you not expect any organism to eat what is most readily available in their environment?

Essentially what these experiments are implying is that the horrible life this monkey has to endure mimics exactly the lifestyle of Americans today! The terrible health consequences of these poor, sick animals are exactly what we face as Americans - a lifetime of sedentism, obesity and constant medical intervention just to live, even though we're supposed to have the most" enviable" lifestyle on earth. Just like Shiva, I have no control over this situation; it is determined entirely for me by a society which is just as restraining and sadistic as the researchers that control Shiva's world.

Now, of course, I can hear the objections. "You could just go do X...blah blah blah." That somehow, despite being on the bottom rung of society, I can somehow escape from the cubicle existence, or somehow work less, or somehow find some magical way that almost nobody finds. Of course, it's usually people with ample means and fortunate circumstances who say things like this. The fact is, when you are on the bottom rungs of society, you have no control over your living conditions by definition! I'd love to find a way out, but when you don't have means, what other options are there? And yes, I do have the free time of weekends and after work (which most people spend sitting around anyway). For that I am grateful (although with the direction things are going in Tea Party America, I suspect this may not last forever). And I can purchase better food, which I thankfully am able to do. So, yes, I'm fully aware that my circumstances are a little better than the research monkey. But when I say a little better, I mean a little better. By and large, it is simply a matter of degree, not substance.

Our "captors" - the people on the top echelons of American society, are just as sadistic and cruel as the researchers conducting these studies. They care not one whit about our wasted lives, our diseases and our deaths. To them, our lives are no more important than the average research monkey. The research monkey yields test results and is tossed aside. We yield profits and are discarded. No real difference.

We just think we are free, but in essence we really are no different from these rhesus macaques. So I hope you'll forgive me if I'm a little cynical about our "wonderful" American lifestyle. To me, we are just monkeys in cages, no different than Shiva. He is my brother. All he and I can do is dream about freedom from our captors, which is probably just as futile in both of our cases.
Posted by escapefromwisconsin at 5:09 PM