Even if humans manage to survive the century, we'll be living on a planet where an incomprehensible amount of magic and mystery will be gone forever. From the lush, blue planet our hunter-gatherer ancestors inherited, we've managed to urn it into a more monotonous and sterile world where nothing exists except the limited biological support systems that cater to our use. We've multiplied like bacteria. We are the ultimate weed. Here are a couple of beautiful things that will be lost forever: 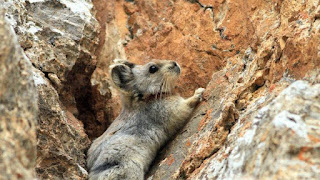 In the past 30 years, their habitat has shrunk by 71%, Mr Li said. This is partly because of climate change and partly because their grazing area has been taken over by a growing population of people at the bottom of the mountain. With less than 1,000 left they are now rarer than pandas. 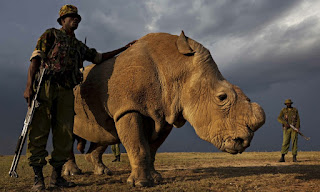 A picture of loneliness: you are looking at the last male northern white rhino (The Guardian) 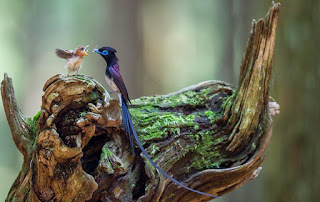 "A recent survey detected a steep decline in part of the Japanese breeding population which has presumably occurred because of forest loss and degradation in its winter range."


'That seems to be true for everything beautiful and awesome in our natural world.  Our grandchildren will have to be satisfied with jellyfish and cockroaches."

But since these animals have no "economic value" to humans, well, to hell with them! What are they good for? What "ecosystem services" do they provide? After all, they need to earn their keep in the Market just like the rest of us, right?

This brings to mind David Quammen's classic essay in Harper's - Planet of Weeds.  It's hard to believe it was written back in 1998. In it, Quammen looks at the mass extinction of species that biologists were predicting even back then, which were on the order of the great mass extinctions in the past. To learn more about it, he talks to a paleontologist named David Jablonsky.


Some people will tell you that we as a species, Homo sapiens, the savvy ape, all 5.9 billion of us in our collective impact, are destroying the world. Me, I won't tell you that because "the world" is so vague, whereas what we aren't destroying is quite specific. Some people will tell you that we are rampaging suicidally toward a degree of global wreckage that will result in our own extinction. I won't tell you that either. Some people say that the environment will be the paramount social and political concern of the twenty-first century, but what they mean by "the environment" is anyone's guess. Polluted air? Polluted water? Acid rain? A frayed skein of ozone over Antarctica? Greenhouse gasses emitted by smokestacks and cars? Toxic wastes? None of these concerns is the big one, paleontological in scope, though some are more closely entangled with it than others. If the world's air is clean for humans to breathe but supports no birds or butterflies, if the world's waters are pure for humans to drink but contain no fish or crustaceans or diatoms, have we solved our environmental problems? Well, I suppose so, at least as environmentalism is commonly construed. That clumsy, confused, and presumptuous formulation known as "the environment" implies viewing air, water, soil, forests, rivers, swamps, deserts, and oceans as merely a milieu within which something important is set: human life, human history. But what's at issue in fact is not an environment; it's a living world.

Here is instead what I'd like to tell you: The consensus among conscientious biologists is that we're headed into another mass extinction, a vale of biological impoverishment commensurate with the big five. Many experts remain hopeful that we can brake that descent, but my own view is that we're likely to go all the way down. I visited David Jablonsky to ask what we might see at the bottom.

Do you see Homo sapiens as a likely survivor, I ask [Jablonksy], or as a casualty? "Oh, we've got to be one of the most bomb-proof species on the planet," he says. "We're geographically widespread, we have a pretty remarkable reproductive rate, we're incredibly good at co-opting and monopolizing resources. I think it would take a really serious concerted effort to wipe out the human species." The point he is making is one that has probably already dawned on you: Homo sapiens is the consummate weed. Why shouldn't we survive, then, on the Planet of Weeds? But there's a wide range of possible circumstances, Jablonski reminds me, between the extinction of our species and the continued growth of the human population, consumption, and comfort. "I think we'll be one of the survivors," he says, "sort of picking up the rubble." Besides losing all the pharmaceutical and genetic resources that lay hidden within those extinguished species, and all the spiritual and aesthetic values they offered, he foresees unpredictable levels of loss in many physical and biochemical functions that ordinarily come as benefits from diverse, robust ecosystems--functions such as cleaning and recirculating air and water, mitigating droughts and floods, decomposing wastes, controlling erosion, creating new soil, pollinating crops, capturing and transporting nutrients, damping short-term temperature extremes and longer-term fluctuations of climate, restraining outbreaks of pestiferous species, and shielding earth's surface from the full brunt of ultra-violet radiation. Strip away the ecosystems that perform those services, Jablonski says, and you expect grievous detriment to the reality we inhabit. "A lot of things are going to happen that will make this a crummier place to live--a more stressful place to live, a more difficult place to live, a less resilient place to live--before the human species is at any risk at all." And maybe some of the new difficulties, he adds, will serve as incentive for major changes in the trajectory along which we pursue our aggregate self interests. maybe we'll pull back before our current episode matches the Traiassic extinction of the K-T event. Maybe it will turn out to be no worse than the Eocene extinction, with a 35 percent loss of species.

Given that hope is a duty from which paleontologists are exempt, I'm surpised when he answers, "Yes, I am."

I'm not. My own guess about the mid-term future, excused by no exemption, is that our Planet of Weeds will indeed be a crummier place, a lonelier and uglier place, and a particularly wretched place for the 2 billion people comprising Alan Duming's absolute poor. What will increase most dramatically as time proceeds, I suspect, won't be generalized misery or futuristic modes of consumption but the gulf between the two global classes experiencing those extremes. Progressive failure of ecosystem functions? Yes, but human resourcefulness of the sort Julian Simon so admired will probably find stopgap technological remedies, to be available for a price. So the world's privileged class--that's your class and my class--will probably still manage to maintain themselves inside Homer-Dixon's stretch limo, drinking bottled water and breathing bottled air and eating reasonably healthy food that has become incredibly precious, while the potholes on the road outside grow ever deeper. Eventually the limo will look more like a lunar rover. Ragtag mobs of desperate souls will cling to its bumpers, like groupies on Elvis's final Cadillac. The absolute poor will suffer their lack of ecological privilege in the form of lower life expectancy, bad health, absence of education, corrosive want, and anger. Maybe in time they'll find ways to gather themselves in localized revolt against the affluent class. Not likely, though, as long as affluence buys guns. In any case, well before that they will have burned the last stick of Bornean dipterocarp for firewood and roasted the last lemur, the last grizzly bear, the last elephant left unprotected outside a zoo.

If bees go extinct, this is what your supermarket will look like (io9)

The lion: A victim of its own power? (BBC)

Many animals kill for their needs, but what other animal kills for pleasure and status alone?
Posted by escapefromwisconsin at 8:45 PM