From my family to yours, I bid you warm wishes for the only holiday that matters in December - the festival of Krampus:


Icelandic lore, for example, has 13 Santa figures, known as the Jolasveinar. The offspring of Gryla and Leppalud, a pair of 13th-century ogres, these elfin characters preface their gift-giving with nearly two weeks of mischief that would make any Halloween poltergeist proud. Hurdaskellir (a k a the Door Slammer), keeps folk up at night. Pottasleikir, the Pot Licker, well . . . licks pots (wash before using, please). Throw in the Window Peeper, the Sausage Snatcher and the Doorway Sniffer (who are we to judge?), and one might think twice about a holiday trip to Reikjavik.

And what about the naughty children? Gryla and Leppalud have always relied on a fairly modest proposal: they eat them.

Greece's Kalikantzari are similarly malevolent imps, marking the season by slipping down the chimney and urinating on the fire, or by mounting the backs of innocent citizens and forcing them to dance to exhaustion. And Austrians have their Krampus, a ghoulish, goat-like figure that springs into action on Dec. 5. It is the task of the Krampus to tear about the countryside, threatening passersby with chains and sticks -- all as a reminder to behave. The legend is re-enacted in many areas by men in frightening Krampus garb.

''It's really an amazing sight,'' said Bill Egan, a self-styled Christmas historian and regular contributor to Year 'Round Christmas magazine. ''People are screaming and screeching like they're watching a Freddy Krueger movie.''

Have a Very Scary Christmas (NYTimes)

Krampus - the dark side of Christmas (TYWKIWDBI) 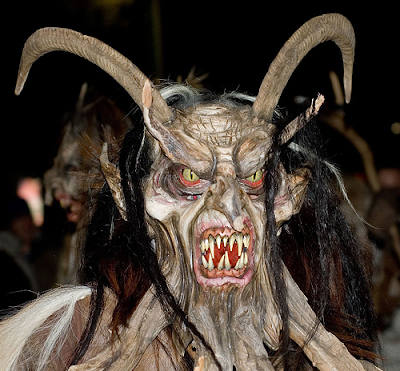 Have you noticed you can’t go far this Christmas season without seeing the krampus, a devil-like consort to Saint Nicholas? All of the sudden, the devilish fellow seems to be everywhere.

But it is far less likely that you have encountered another Christmas-time mythic character, that of Frau Perchta. She makes the Krampus seem amiable to boot.

Perchta asks,”have you been weaving your flax little girl? Have you been good? Are you eating the awful gruel and fish that are to be consumed on my holiday?” If the answer is no, the poor children are disemboweled, and their insides are stuffed with straw and stones. So, you know. Don’t mess up. By comparison to the two of them, Saint Nicholas’ ‘present’ of coal seems benign.

Myths of the Holidays: Who Makes Krampus Look Jovial By Comparison? (Disinfo)

Posted by escapefromwisconsin at 8:08 AM