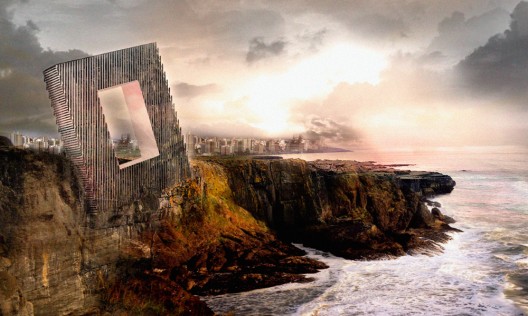 Time for another brief foray into the world of architecture.

I wonder what Kunstler would have to say about this. This article by Oliver Wainwright in The Guardian makes the case that the elaboate rendering software suites used by architects today are actually harming the profession. Students learn all sorts of fancy rendering techniques, but have no idea how to actually construct a building in the real world with all it's messiness - clients, code officials, deadlines, budgets, and, you know, gravity and rain:


Time and again, the projects seemed intent on fleeing the real world of people and places, scale and context; retreating instead into fantasy realms of convoluted forms with no seeming purpose. There were scaleless worlds of splintered shards and riverine landscapes, in which forlorn mechanisms had been implanted like post-apocalyptic ruins of a distant-future race. Clouds of lines and layers were regularly employed as a smokescreen to disguise the fact that there wasn't really an idea at all: visual complexity masking conceptual thinness.

Elsewhere, data was the order of the day, with sinuous blobs generated by computer-scripted commands, wrenched into algorithmic oblivion then squirted out on a 3D printer. This was generally a process so tortuous that students had forgotten quite where their starting point was – or even what their building was for.

Other projects were staged in near-future scenarios of such complexity – with new legal, social and political structures – that after half an hour of explanation, the assembled critics were none the wiser as to what the student was proposing.

Once again a case of improved means to unimproved ends. Plus, you can just put trees all over your building to make it "green" in the computer rendering. I'm sorry, I love trees and I love buildings, but they're two different things! Why do we suddenly have this idea that putting up a building is somehow environmentally neutral if I stick a bunch of trees and vines on it? Either we need the building or we don't. Architects are not, nor should we be, gardeners. 
Bizarrely, architectural education – the discussion of places and spaces, cities and landscapes, a discipline of engaging with the world around us – has been allowed to stagnate in the UK as a hermetic, inward-looking pursuit for more than 50 years. The extended three-part system, which takes a minimum of seven years to complete, is still based on the model that emerged from the RIBA Conference on Architectural Education in 1958.

With tuition fees now standing at £9,000 per year, as well as the added costs of printing, laser-cutting, field trips and living expenses, students can expect to graduate with debts of £100,000 or more – at a time when there are few job opportunities in the profession. It has never been more urgent to call out the emperor's new clothes, to question those courses that are only there to further the theoretical position of their tutors.

To which I can only say:

I would go further to say that there's no way a student of modest means can be an architect anymore. Knowing what I know now, I wouldn't do it again, and I think of leaving all the time (but where?).

There's no reason students should spend much time in school at all. They can learn it all on the job, with night classes making up the difference. I had to teach myself literally everything for my exams, in school I didn't learn a thing, including how building went together, codes, or even proper drafting skills (computers or by hand). Good thing I'm an autodidact.

Often I get flyers for three-day seminars from the University of Wisconsin-Madison. One of them is for waterproofing and preventing moisture penetration in buildings, roofs, elevated decks, etc. I took a three-day seminar in structural design when I was studying for my exams (which I paid for out of pocket). So can anyone tell me why it takes 5-7 YEARS in school and thousands of dollars to be an architect? American architectural educators will talk about teaching creative thinking and other such nonsense, but they are on the gravy train and will do anything to keep the racket going (seriously, these guys have the best jobs in the universe: six-figure salaries, exotic foreign travel, six month sabbaticals, ten hour work-weeks, etc.). So you won't hear the truth from them.

If you're not a creative thinker, you don't belong in architecture, and school won't make you into one, despite what they say. Some eighteen-year-old kid straight out of high school is not going to design a skyscraper and learn anything. Frank Lloyd Wright didn't spend a day in architecture school (nor did Rudolf Steiner - see below). Architecture school is just there to limit the profession to children of wealthy families. Period.

this essay at Arch Daily references the Guardian article and asks, "Are Renderings Bad for Architecure?":


The idea of the perfect architectural image is not only propagated by professors who prioritize the rendering over its practical implications (causing students to spend hours perfecting visuals instead of perfecting the design), but also by the architecture media (and yes, we include ourselves in that category). Architecture media presents a flood of glossy shots that “sell” an idealized architecture to the public and, frankly, architects themselves.

In his essay “Digital Deception”, written for Design Observer, Belmont Freeman laments this obsession with the perfect, photo-shopped image, which has become – thanks to technology – far too easy to achieve: “our eyes are trained to believe that a photograph is a true representation of an existing condition. Thus in the digital age the graphic representation of architecture has moved beyond an exercise in persuasion; it has become an exercise in deception. [... The architect] has every incentive to indulge in digital dissimulation and little risk in doing so. Photoshop and similar software have become the architectural profession’s pharmacy of performance-enhancers; impossible to detect and absolutely ubiquitous.”

Freeman’s point of “deception” is an important one. I believe architects have bought into this idealization of the image not just because of their education or the influence of the media, but also, as I suggest in my review of CLOG: Rendering, because it’s a therapeutic act of self-deception. Working on the theories of Jonah Hill, I write that photo-shopping “allows the architect to see his work as it was before being built, an un-compromised vision.”

The danger of this is that, in the end, as CLOG contributor Wenzel says, “the image exists independent of the concept, to be evaluated as a graphic. Architecture by graphic design” (Wenzel 73). In other words, the architecture itself is erased, eclipsed by its image. And that has real consequences. As Freeman puts it: “I fear that the proliferation of such photographs leads clients and the public at large to expect from architecture and architects a degree of quality — perfection — that is impossible to deliver in the real world.”


Not all the proposals in the master plan have been constructed but the latest, the Goethean Science Building, is an exemplar for the philosophy described above and provides a methodology for designing on any site regardless of its location and characteristics. This building, and its predecessors, stand in stark contrast to the results of most contemporary architectural practice: it was built almost entirely without the use of power tools, it contains virtually no cement or plastic, it has no power or mains water, and it took nearly 5 years to construct using a high percentage of volunteer labour with no main contractor involved. The process by which it came about was through a consensus of all involved, with the architect taking the role of enabler rather than controller of the outcome.

The name of the new building refers to the person whose work originally inspired this radical way of observing the environment, Johann Wolfgang von Goethe (1749 -1832). Although he is primarily remembered as the author of the play Faust, Goethe was also a scientist, and in his later years devoted himself to the study of nature and the creation a garden at his home in Weimar. On a two year journey to Italy (1786-1788) Goethe began to develop a way of looking at plants that resulted in his discovery of the 'archetype' from which all plant forms are generated and he published the results in 1790 in a small book called The Metamorphosis of Plants. Later, the Austrian philosopher, scientist and writer Rudolf Steiner (1861-1925) was as a young man entrusted with the task of organising Goethe’s archives and then went on to name after him the centre that he built for the continuation of this work. The Goetheanum, located in Dornach, Switzerland, the second version of which survives today - the first having been destroyed by fire in 1922 - was the world's first use of sculptural insitu cast concrete and is now a Swiss National Monument.

Although not trained as an architect, Steiner was involved in the design of over 20 buildings between 1908 and his death. Many teachers at the Bauhaus were well aware of his ideas, particularly Wassily Kandinsky and Piet Mondrian. Hannes Meyer was for a time a committed supporter and Walter Gropius was connected through his brief marriage to Alma Mahler, who had an interest in the associated philosophy of Theosophy. Later in the 20th century, the German artist Joseph Beuys openly acknowledged Steiner’s influence, as did the Russian film maker Andre Tarkovsky.

Both Christopher Day and Margaret Colquhoun work out of these sensibilities and are very much influenced by both Goethe’s and Steiner’s insights. The ultimate aim of this methodology is to objectify our subjective reactions in order to better understand what needs to happen when we make any intervention in the environment. The way in which we train ourselves to do this is by carefully observing nature and developing ways of seeing the formative forces that lie behind its endless manifestations.

Here is Steiner's most well-known building, the Goetheanum: To bring it full circle, this reaction to the above article believes Steiner would have embraced the new technology. And it has some interesting things to say at the end:


The Prince of Wales has a great understanding of these things. He is sensitive to the needs of mankind and the needs of the planet. He knows that more is required of architecture, but he can’t see past traditionalism for the solution. If Quinlan Terry’s classicism is God given, then Rudolf Steiner’s creativity is sought from the spiritual world through meditative consciousness, hard work and being rooted in knowledge of the past, present and future. Indeed, if architects were unable to predict the future, to some extent, their buildings would be immediately obsolete! When Rudolf Steiner was asked by an architect how to design, he simply said ‘ask yourself what will happen.’

What is important is that architecture can be both a ‘whole’ in itself and part of a ‘greater whole’. It needs to support both physical and emotional needs; to function both during night and day; to embrace the feminine and the masculine; to relate to the earth and to the universe; to embody substance, relevance, beauty and meaning; to relate to earth, water, air and fire; to embrace the straight line and the curved line; I could go on. To bring these things into balance, harmony and dynamic in architecture is a spiritual task of making wholeness.


Posted by escapefromwisconsin at 9:37 PM