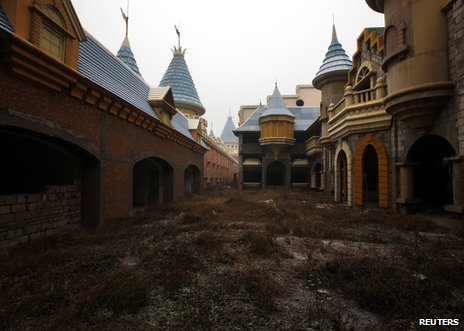 
As growth slows, China's huge investment in infrastructure is looking ever harder to sustain, leaving a string of ambitious projects - towns, shopping malls and even a theme park - empty and forlorn.

"We have spoken a lot about these ghost towns in Ireland and Spain recently [but China] is Ireland and Spain on steroids," says Kevin Doran, a senior investment fund manager at Brown Shipley in the UK. Investment in infrastructure accounts for much of China's GDP - the country is said to have built the equivalent of Rome every two months in the past decade. And with such a large pool of labour, it is harder to put the brakes on when growth slows and supply outstrips demand.

"You have got seven to eight million people entering the workforce in China every single year, so you have to give them something to do in order to retain the legitimacy of the government," says Doran. "Maybe 10 or 15 years ago they were doing things that made sense - roads, rail, power stations etc - but they have now got to the point where it's investment for investment's sake."

So know we know what we're doing with the last of the fossil fuels. Glad to know growth is all going to improved living standards like the economists tell us. Hopefully the Keystone pipeline will enable much more of this.

The Disneyesque castle and medieval ramparts of this theme park north of Beijing, conceived nearly 20 years ago, lie abandoned. Local farmers grow crops among the empty buildings. In the mid-1990s, developers had promised to build the largest amusement park in Asia, but the project got mothballed over a land rights dispute. The site does in fact attract visitors, according to locals quoted by Chinese media, but hardly the sort the developers had in mind - they are drawing students, photographers and artists from Beijing, apparently, in search of a "ruin culture".

RELATED: These are China’s weirdest monuments (i09)

Posted by escapefromwisconsin at 9:23 PM