Warnings that the world is headed for "peak oil" – when oil supplies decline after reaching the highest rates of extraction – appear "increasingly groundless", BP's chief executive said on Wednesday.

Bob Dudley's remarks came as the company published a study predicting oil production will increase substantially, and that unconventional and high-carbon oil will make up all of the increase in global oil supply to the end of this decade, with the explosive growth of shale oil in the US behind much of the growth.

As a result, the oil and gas company forecasts that carbon dioxide emissions will rise by more than a quarter by 2030 – a disaster, according to scientists, because if the world is to avoid dangerous climate change then studies suggest emissions must peak in the next three years or so.

So-called unconventional oil – shale oil, tar sands and biofuels – are the most controversial forms of the fuel, because they are much more carbon-intensive than conventional oilfields. They require large amounts of energy and water, and have been associated with serious environmental damages.
While some new conventional oilfields are likely to come on stream before 2020, they will be balanced out by those being depleted.

BP predicts that by 2030, the US will be self-sufficient in energy, with only 1% coming from imports, the company's analysts predict. That would be a remarkable turnaround for a country that as recently as 2005, before the shale gas boom, was one of the biggest global oil importers.

Here's is his chart: 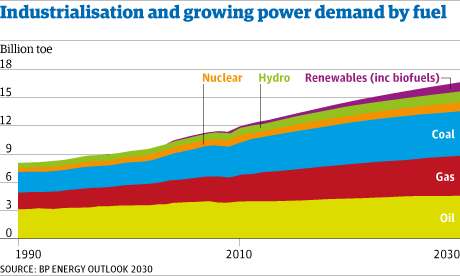 For a rebuttal, here's Chris Martenson: The really, really big picture: There isn't going to be enough net energy for the economic growth we want (Resilience.org).


There has been a very strong and concerted public-relations effort to spin the recent shale energy plays of the U.S. as complete game-changers for the world energy outlook.  These efforts do not square up well with the data and are creating a vast misperception about the current risks and future opportunities among the general populace and energy organizations alike.  The world remains quite hopelessly addicted to petroleum, and the future will be shaped by scarcity – not abundance, as some have claimed.

This series of reports will assemble the relevant data into a simple and easy-to-understand story that has the appropriate context to provide a meaningful place to begin a conversation and make decisions.

Since completing the Crash Course in October of 2008, much has gone as I anticipated in the way of money printing, official neglect of the main predicaments we face, and generally higher petroleum costs (2012 was the record so far on a yearly basis).

What has not changed is the general trajectory of liquid fuels becoming increasingly expensive and more difficult to produce.  I know that this runs counter to virtually every news article that has come out recently.  It is time to separate the data and facts from the hype.  Much has recently been either muddied or presented so far out of context as to be more distortive than helpful.

Here is his chart (one of them, anyway): Seems to contradict the other one, although note that the first chart indicates all energy sources (coal, natural gas, biofuels, nuclear (!) etc.), not just liquid fuels. You can't put coal in your gas tank. In any case, I don't see BP contradicting the fundamental narrative - because unconventional oil sources are so difficult to extract, produce and refine, the higher costs must be passed along to the end users. Because the cost of energy is high, and because the economy is entirely dependant on fossil fuels at its base, economic growth is constrained. Neither does it contradict that every source of fossil fuels, conventional or not, reaches a peak and enters decline at some point (note that this is not a theory; it is observable fact). And as the third paragraph of the first article states, it also means that climate change will probably sink us (what does that do to the biofuel forecast? and water...?). As Chris Martenson states:


What galls me at this stage is that all of the pronouncements of additional oil being squeezed, fractured, and otherwise expensively coaxed out of the ground are being delivered with the message that there's so much available, there's nothing to worry about (at least, not yet.)  The message seems to be that we can just leave those challenges for future people, who we expect to be at least as clever as us, so they'll surely manage just fine.

But what it does mean is that the Peak Oil picture is complicated. And we like easy answers and simple narratives, don't we?

Oh, and about those biofuels: Biofuels and Hunger in Low-Income Countries (The Conversable Economist)


Wise estimates: "Using conservative estimates from a study on ethanol and corn prices, we find that from 2006-2011 U.S. ethanol expansion cost net corn importing countries worldwide $11.6 billion in higher corn prices with more than half of that cost, $6.6 billion, borne by developing countries." Of course, the  high prices for corn hit the pocketbooks of low-income people in low-income countries the hardest.

It's been clear for awhile now that subsidizing the production of corn-based ethanol was primarily a subsidy that flowed to large agri-business concerns that grow and process most of the corn in the United States. These subsidies aren't just a costly and ineffective way of pursuing lower energy imports and reduced carbon emissions--they are also causing higher food prices and hunger for some of the poorest people in the world. They should be stopped.