The Internet Wonders What Are People Good For

So since last week there's been quite a bit in the blogosphere about automation. Last week I posted this tidbit from Matt Yglesias at Slate:

What will everyone do for work when everything is automated? They'll take care of old people and sick people, because people would rather interact with human beings if possible. How will we afford all this caretaking for the elderly? Because there will be so much automation that we'll enjoy lives of material plenty even with very little human work.

Kevin Drum calls this "our bed pan and canasta future." Russ Douthat at the New York Times comments, "video games in the morning, changing strangers' bedpans in the afternoon, soma at nightfall." Drum further comments, "Raise your hand if this sounds like a wonderful vision of the future. Anyone?" Nice to see some unity across the political spectrum.

Drum goes on to describe a scenario similar to mine:


... the owners of capital will automate more and more, putting more and more people out of work. Liberals will continue to think that perhaps this can be solved with better education. Conservatives will continue to insist that people without jobs are lazy bums who shouldn't be coddled. The lucky owners of capital won't care. Their numbers will decline, but the ones who remain will get richer and richer. The rest of us will have no jobs, and even with all this lovely automation, our government-supplied welfare checks will be meager enough that our lives will be miserable.

This won't last forever. Eventually there will be a revolution, peaceful or otherwise, and the economic system will change. But until that happens, the next few decades are going to be mighty grim for an awful lot of people. Some of them will get $10 an hour jobs changing bedpans and pretending to enjoy the company of old people, while others won't even be suitable for that kind of work and will simply drop out of the labor force permanently.


People will just get used to it over time, just as all the former union guys who were shocked by post union work rules and right to work laws had to get used to having less power and control over their working lives and declining wages while their pensions could be taken on a whim by management and disappeared (while executive pay and benefits went through the roof).  Today's generation of children are used to being spied on, treated like sheep in schools, abused by police and authorities, disrespected by adults and feared by fellow potential employees who don't have the computer skills they do.

I think Yglesias was being optimistic. he was extrapolating from this chart:

But being an economic commentator, he was unable to discern what an astute reader pointed out: healthcare is the latest bubble du jour. As I pointed out, where will the money to pay these salaries come from? How are we going to tax the public to pay for all these health care workers when the public consists mainly of these health care workers? Explain to me how that works. Are we going to tax robot owners? I think that money will end up in political campaigns instead. And we can also see why it's men who are not fitting into the new economy. I shake my head whenever I hear some commentator say that men are just going to have to get with the program and train for the jobs of today. Why don't those silly, stubborn men get out from behind the wheel of that truck, put down the power tools, and pick up a catheter for grandma, or start reading to some children? Riiight...It's the typical view economists have of the rest of us: people are merely interchangeable, modular widgets, with no interests, aptitudes and ambitions, who must just fit themselves into whatever the "economy" demands, or face the consequences. To paraphrase a line from Eastern Europe: the economy is not working for the American people, therefore we must reinvent the people.

Krugman followed up his article in the Times with some more analysis here:
Technology and Wages, the Analytics (Wonkish)

And a host of articles can be found at the excellent Fabius Maximus blog:
Krugman discovers the Robot Revolution! (Fabius Maximus)


What's the answer? Liberals suggest more vocational education. Conservatives think we should stigmatize nonwork and reduce welfare transfers. Everyone agrees that more kids should go to college. But will any of that work? Craft work has long since given way to factory work, and if Chinese workers will do factory work for less than American workers, then more vocational education won't do much good. Likewise, if there just aren't enough jobs for the weakly educated, stigmatizing nonwork won't do any good either. It will just immiserate people for no reason. And the kind of people who are most affected by all this—high-school dropouts and those who barely got diplomas—aren't going to college no matter how much we push them. It's just not going to happen.

And Krugman again noting the wage premium from college has plateaued: 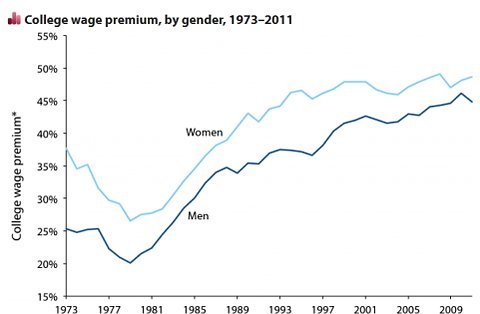 
Not to say I have all the answers either, but here on the crazy Left we at least have some ideas. Ideas that don’t presuppose the desirability of keeping the assembly line of employment going at all costs, pumping out something that we can call “middle class jobs”. Ideas that get back to crazy notions like working time reduction and the decommodification of labor. These days, the unrealistic utopians are the nostalgics for the Fordist compromise, who see the factory worker with a high school diploma and a middle class income as the apex of human emancipation. But as Lenin said, “One can never be radical enough; that is, one must always try to be as radical as reality itself”.

That last paragraph link to this must read article by the same author:  The Politics of Getting a Life (Jacobin)

I guess I can say I was ahead of the curve.
Posted by escapefromwisconsin at 7:20 PM