When we talk about pedal power, we're usually referring to the production of electricity, whether to power a gym or a prisoner's television. But Maya Pedal keeps it simpler than that: the machines they build use no electricity. Instead, they are individually designed to perform a certain task, like grind corn, pump water, depulp coffee beans, shell nuts, blend food and more.

As Lloyd has noted, bikes can do just about anything, and Maya Pedal is always working on new designs. (They even offer instructions for building some of their models online.) It's easy to see why the program has grown, and why Maya was a 2010 finalist for the Curry Stone Design Prize for social change.

These machines make a world of difference to local small businesses, which don't need to rely on or pay for undependable electricity, and are relieved of difficult and time consuming manual labor.

From Energy and Equity by Ivan Ilich:

A century ago, the ball-bearing was invented. It reduced the coefficient of friction by a factor of a thousand. By applying a well-calibrated ball-bearing between two Neolithic millstones, a man could now grind in a day what took his ancestors a week. The ball-bearing also made possible the bicycle, allowing the wheel—probably the last of the great Neolithic inventions—finally to become useful for self-powered mobility.

Man, unaided by any tool, gets around quite efficiently. He carries one gram of his weight over a kilometer in ten minutes by expending 0.75 calories. Man on his feet is thermodynamically more efficient than any motorized vehicle and most animals. For his weight, he performs more work in locomotion than rats or oxen, less than horses or sturgeon. At this rate of efficiency man settled the world and made its history. At this rate peasant societies spend less than 5 per cent and nomads less than 8 per cent of their respective social time budgets outside the home or the encampment.

Man on a bicycle can go three or four times faster than the pedestrian, but uses five times less energy in the process. He carries one gram of his weight over a kilometer of flat road at an expense of only 0.15 calories. The bicycle is the perfect transducer to match man’s metabolic energy to the impedance of locomotion. Equipped with this tool, man outstrips the efficiency of not only all machines but all other animals as well.

The invention of the ball-bearing, the tangent-spoked wheel, and the pneumatic tire taken together can be compared to only three other events in the history of transportation. The invention of the wheel at the dawn of civilization took the load off man’s back and put it onto the barrow. The invention and simultaneous application, during the European Middle Ages, of stirrup, shoulder harness, and horseshoe increased the thermodynamic efficiency of the horse by a factor of up to five, and changed the economy of medieval Europe: it made frequent plowing possible and thus introduced rotation agriculture; it brought more distant fields into the reach of the peasant, and thus permitted landowners to move from six-family hamlets into one-hundred family villages, where they could live around the church, the square, the jail, and—later—the school; it allowed the cultivation of northern soils and shifted the center of power into cold climates. The building of the first oceangoing vessels by the Portuguese in the fifteenth century, under the aegis of developing European capitalism, laid the solid foundations for a globe-spanning culture and market.

The invention of the ball-bearing signaled a fourth revolution. This revolution was unlike that, supported by the stirrup, which raised the knight onto his horse, and unlike that, supported by the galleon, which enlarged the horizon of the king’s captains. The ball-bearing signaled a true crisis, a true political choice. It created an option between more freedom in equity and more speed. The bearing is an equally fundamental ingredient of two new types of locomotion, respectively symbolized by the bicycle and the car. The bicycle lifted man’s auto-mobility into a new order, beyond which progress is theoretically not possible. In contrast, the accelerating individual capsule enabled societies to engage in a ritual of progressively paralyzing speed.

The monopoly of a ritual application over a potentially useful device is nothing new. Thousands of years ago, the wheel took the load off the carrier slave, but it did so only on the Eurasian land mass. In Mexico, the wheel was well known, but never applied to transport. It served exclusively for the construction of carriages for toy gods. The taboo on wheelbarrows in America before Cortes is no more puzzling than the taboo on bicycles in modern traffic.

It is by no means necessary that the invention of the ball bearing continue to serve the increase of energy use and thereby produce time scarcity, space consumption, and class privilege. If the new order of self-powered mobility offered by the bicycle were protected against devaluation, paralysis, and risk to the limbs of the rider, it would be possible to guarantee optimal shared mobility to all people and put an end to the imposition of maximum privilege and exploitation. It would be possible to control the patterns of urbanization if the organization of space were constrained by the power man has to move through it.

Bicycles are not only thermodynamically efficient, they are also cheap. With his much lower salary, the Chinese acquires his durable bicycle in a fraction of the working hours an American devotes to the purchase of his obsolescent car. The cost of public utilities needed to facilitate bicycle traffic versus the price of an infrastructure tailored to high speeds is proportionately even less than the price differential of the vehicles used in the two systems. In the bicycle system, engineered roads are necessary only at certain points of dense traffic, and people who live far from the surfaced path are not thereby automatically isolated as they would be if they depended on cars or trains. The bicycle has extended man’s radius without shunting him onto roads he cannot walk. Where he cannot ride his bike, he can usually push it.

The bicycle also uses little space. Eighteen bikes can be parked in the place of one car, thirty of them can move along in the space devoured by a single automobile. It takes three lanes of a given size to move 40,000 people across a bridge in one hour by using automated trains, four to move them on buses, twelve to move them in their cars, and only two lanes for them to pedal across on bicycles. Of all these vehicles, only the bicycle really allows people to go from door to door without walking. The cyclist can reach new destinations of his choice without his tool creating new locations from which he is barred.

Bicycles let people move with greater speed without taking up significant amounts of scarce space, energy, or time. They can spend fewer hours on each mile and still travel more miles in a year. They can get the benefit of technological breakthroughs without putting undue claims on the schedules, energy, or space of others. They become masters of their own movements without blocking those of their fellows. Their new tool creates only those demands which it can also satisfy. Every increase in motorized speed creates new demands on space and time. The use of the bicycle is self-limiting. It allows people to create a new relationship between their life-space and their life-time, between their territory and the pulse of their being, without destroying their inherited balance. The advantages of modern self-powered traffic are obvious, and ignored. That better traffic runs faster is asserted, but never proved. Before they ask people to pay for it, those who propose acceleration should try to display the evidence for their claim.

A grisly contest between bicycles and motors is just coming to an end. In Vietnam, a hyperindustrialized army tried to conquer, but could not overcome, a people organized around bicycle speed. The lesson should be clear. High-energy armies can annihilate people—both those they defend and those against whom they are launched—but they are of very limited use to a people which defends itself. It remains to be seen if the Vietnamese will apply what they learned in war to an economy of peace, if they will be willing to protect the values that made their victory possible. The dismal likelihood is that the victors, for the sake of industrial progress and increased energy consumption, will tend to defeat themselves by destroying that structure of equity, rationality, and autonomy into which American bombers forced them by depriving them of fuels, motors, and roads.


One of the biggest problems in sustainable urban transport is what's known as the "first and last mile:" that awkward part of the journey between bus or rail stop and home or office. Many transit planners consider any distance beyond half a mile too far to walk, so without a practical solution to the first and last mile problem, cities run the risk that commuters will simply get into their cars and bypass a perfectly good transit system that's juuuust outside their reach.

That's where designer Gabriel Wartofsky's folding electric bicycle comes into play. Wartofsky has tried to make his e-bike attractive to all potential commuters. It has a gender-neutral look and a low step-over height. It's chainless and electric powered, with a battery hidden in the shaft, so it's grease-free and sweat-free. It folds up neatly and quickly, making it easy to carry on buses or trains, and weighs just 25 pounds — and, if that's not light enough for you, it's even cartable when folded. 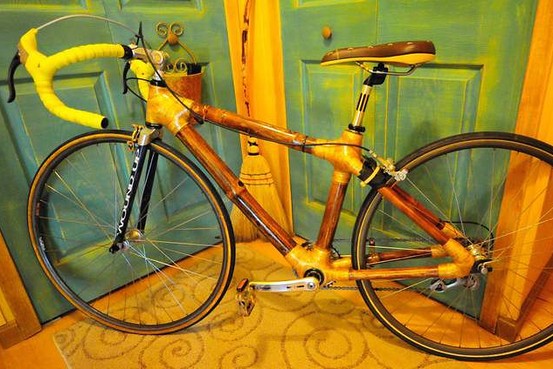 Bike frames have come a long way from steel and aluminum to exotic alloys and carbon fibers. Now, in the Philippines, they’re going all the way back to bamboo. The “bamboo bike” is turning into the latest hot item for environmentalists here, with its low carbon footprint. Bamboo is also tough and light: Bamboo bike frames weigh about seven to ten pounds.

Bike-friendly cities: How to do it:

From the Netherlands to America: Translating the World's Best Bikeway Designs from Streetfilms on Vimeo.