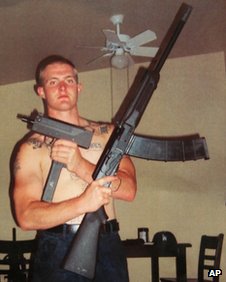 Looking at the news today, I think I've found 2012 trend #2: traumatized veterans returning from wars and causing trouble. There have been a number of stories dribbling out over the past few years - domestic violence, suicide, etc. Lately, there seems to be a spike in such news stories.

Consider it fallout from America's military adventures. When societies become militarized, they change. We've trained the our working class to kill, and disposed of them when we're done with them (it's what our economic system does to workers as well):

CORONADO, Calif (Reuters) - Two Navy pilots were among four people killed in an apparent New Years Day murder-suicide on the wealthy island of Coronado off the coast of San Diego, officials said on Monday. The two were F/A-18 pilots training at the U.S. Marine Corps Air Station Miramar, the base said. The San Diego County Medical Examiner's Office initially posted on its website that the both were male, and both 25 years old. The Medical Examiner's information said the third deceased man was a 31-year-old resident of nearby Chula Vista. The Office later took the information off the website.

Authorities in Coronado, a wealthy island enclave off the coast of San Diego, were called to a condo shortly after 2 a.m. on Sunday to investigate a report of shots fired at the residence, according to the sheriff's department. Once there, officers found the body of an adult male with an apparent gunshot wound lying in the doorway of the building, police said. After entering the condo, police found the bodies of two more men and a woman. Further details, including the identities of the dead, have not yet been released.

Two Navy pilots among those killed in murder-suicide

According to police and court documents, Barnes had a troubled transition to civilian life, with accusations in a child custody dispute that he suffered from post-traumatic stress disorder following his Iraq deployments and was suicidal. The mother of his toddler daughter sought a temporary restraining order against him, according to court documents. She alleged that he got easily irritated, angry and depressed and kept an arsenal of weapons in his home. She wrote that she feared for the child's safety.

Undated photos provided by police showed a shirtless, tattooed Barnes brandishing two large weapons. The woman told authorities Barnes was suicidal and possibly suffered from post-traumatic stress disorder after deploying to Iraq in 2007-2008, and had once sent her a text message saying "I want to die." In November 2011, a guardian ad litem recommended parenting and communication classes for both parents as well as a visitation schedule for Barnes until he completed evaluations for domestic violence and mental health and complied with treatment recommendations. Barnes is believed to have fled to the remote park on Sunday to hide after an earlier shooting at a New Year's house party near Seattle that wounded four, two critically. Authorities suspect he then fatally shot ranger Margaret Anderson.

Police: Body found at US park is that of gunman

SAN ANTONIO (Reuters) - A man arrested on New Years Eve at a Texas airport with explosives is an Army-trained demolitions expert and member of the elite Green Berets who served in Afghanistan and is stationed at Fort Bragg, North Carolina, military officials said on Monday. Trey Scott Atwater, 30, was being held in the Midland, Texas County Jail on a federal charge of attempting to board an aircraft with an explosive, the FBI said. He was detained after a routine Transportation Security Administration (TSA) check noticed he had explosives in his carry on luggage while trying to board an American Eagle flight from Midland International Airport to Dallas Saturday morning, according to an FBI statement. Officials declined to speculate on the reason Atwater had the explosives, which city officials said were in "military grade explosives wrapping" in his bag.

Man arrested with explosives at airport was Army expert
(UPDATE: he claimed he forgot it in his pack. Okay, but why are soldiers running around with C-4 inside the United States?)

Both John Robb and Dmitry Orlov have frequently written about the difficulties of returning vetrans adjusting to life outside the military. Here's John Robb:

Here's the unemployment rate for young veterans (16.6%, for vets up to 34). Note: from what I can tell from this Business Week analysis, they are using the weak measure of unemployment (not the one used during the Great Depression).

•Lots of these guys are combat vets. They are typically the least employable given their training.

•There are many more yet to come. Hundreds of thousands have yet to be laid off. Big defense cuts are coming as the budget continues to gush red ink.

•Unemployment is going to get much worse in the next couple of years.

IF we keep going in this direction, and there's no reason to think we won't, these young men find new groups to care for them and they shift their loyalties to new gangs/mafias/cartels/militias etc. at a pretty amazing clip. Given the danger this shift in primary loyalties represents for the future, going it alone isn't an option. You need a community at your back.

And so we will have former soldiers, former police, and former prisoners: a big happy family, with a few bad apples and some violent tendencies. The end result will be a country awash with various categories of armed men, most of them unemployed, and many of them borderline psychotic. The police in the United States are a troubled group. Many of them lose all touch with people who are not "on the force" and most of them develop an us-versus-them mentality. The soldiers returning from a tour of duty often suffer from post-traumatic stress disorder. The paroled prisoners suffer from a variety of psychological ailments as well. All of them will sooner or later realize that their problems are not medical but rather political. This will make it impossible for society to continue to exercise control over them. All of them will be making good use of their weapons training and other professional skills to acquire whatever they need to survive. And the really important point to remember is that they will do these things whether or not anyone thinks it legal for them to do be doing them.

RELATED:
Disturbing video that shows U.S. soldiers ‘blowing up a dog in Iraq for fun’
Posted by escapefromwisconsin at 3:19 PM